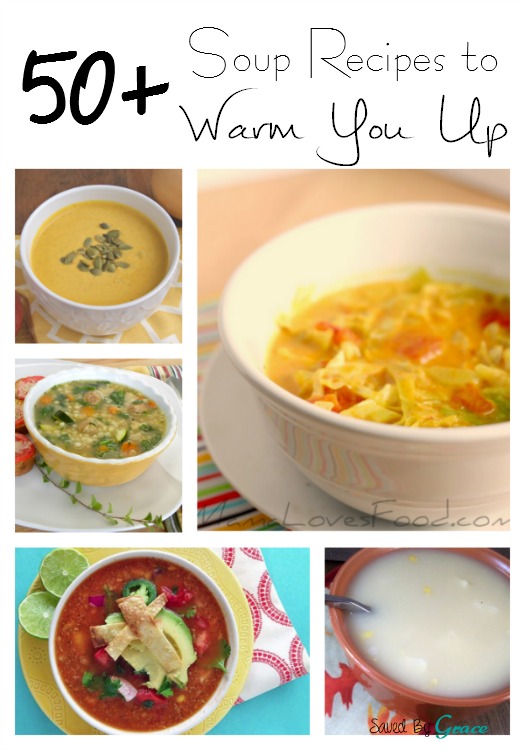 My husband refers to this season as “Soup season” and he gets very excited about it. I love to make soups at home and I have become somewhat of a soup snob as I very rarely use or buy canned soups. After learning how easy it ius to make soup at home and control the ingredients, I just see no reason to do it anymore unless it is for something very quick like my Hamburger Casserole or something.

Here are some awesome soup recipes I haven’t picked to warm you up during the cold season. I hope you enjoy them!

50+ Soup Recipes to Warm You Up

Chicken Tortilla Soup by I Eat, Therefore I Cook

White Bean & Sausage Soup by The Kitchen is my Playground

Roasted Cauliflower and Basil Soup by Saved By Grace

Wild Mushroom Soup by Confessions of an Overworked Mom

Farm Fresh Broccoli Cheese Soup by How Does Your Garden Grow?

Creamy Cabbage and Kielbasa Soup by The Daring Gourmet

Roasted Fennel and Cauliflower Soup by In Sonnet’s Kitchen

Ham & Bean Soup by Art and the Kitchen

Lentil Soup by Dinner Was Delicious

Chinese Egg Drop Soup by Barefeet in the Kitchen

Hot and Sour Soup by The Woks of Life

Tuscan Tortellini Soup by A Dash of Sanity

Italian Noodle Soup by Your Cup of Cake

I hope you enjoy this wonderful soup season and give some of these recipes a try!