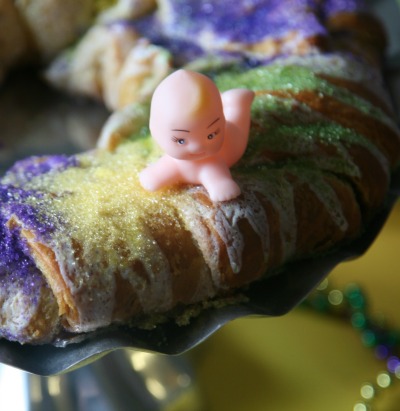 I have been a little New Orleans obsessed since I went there a couple of months ago. Being that I was raised Catholic for a period of time, I knew essentially what Mardi Gras was essentially about, but it wasn’t until I visited Mardi Gras world there that I learned much more and I became really intrigued. I absolutely love the culture in that city and hope to one day return there for another trip, ideally during the carnival season.

I tried my first piece of King Cake there and I loved it so much I just knew I had to attempt to make my own at home here in the Pacific Northwest. From what I was told there and what I could research, there are a couple of ways to make a King Cake depending on where, or rather what local bakery, you get it from and who you ask. Some recipes have a cream cheese filling while others don’t. I felt that the slice I had in NOLA was pretty similar to a cinnamon roll and that’s what inspired my recipe. In any case, the meaning behind the King Cake is the same- to have fun and a tradition that leads into Fat Tuesday, the day before Lent begins in the Catholic faith. 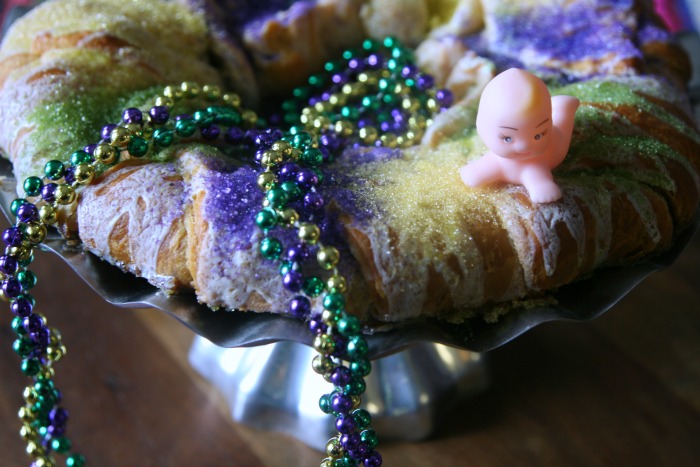 My recipe here is for a lazy version of King Cake because I did not make my own base, just the filling. This cake took me around 30 minutes from start to finish and is pretty fool proof, even for a baking failure like myself. Let’s look at some of the tradition surrounding the King Cake.

The Meaning Behind a King Cake

If you have never had a King Cake, you may be wondering what the plastic baby in it is for. This is a symbol of the Christ child (the epiphany) and is placed in the cake for a lucky person to find in their piece. The idea is that the one who finds it gets extra blessings for the coming year and they also get the honor of making the next King Cake celebration and inviting everyone over. Many King Cakes are eaten throughout the carnival season in New Orleans which lasts for weeks. I did not put the baby in before I baked it because the idea of plastic leeching into food is not one I wanted to deal with.

The Mardi Gras colors are green, gold and purple. These symbolize purple for justice, green for faith and gold for power. 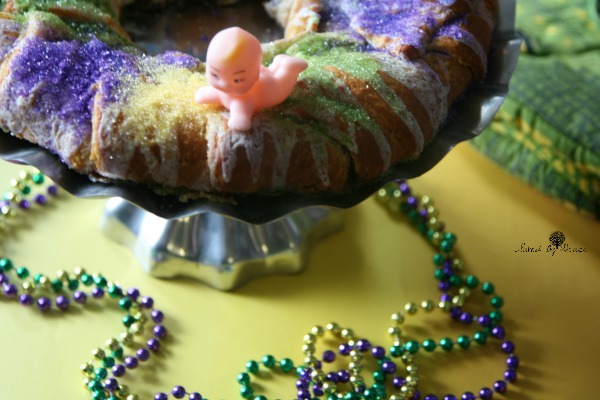 To Make this Lazy King Cake Recipe, you will need:

Cream Cheese Frosting (make your own or buy)

Open both cans of crescent rolls and gently separate them. Place them in a circle on an ungreased cookie sheet with the points facing in. slightly overlap them. Set aside. 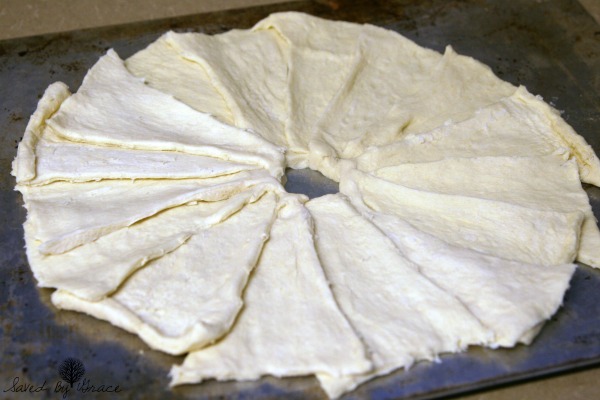 In a medium mixing bowl, add melted butter and vanilla extract together. Mix in brown sugar and ground cinnamon. Fold in the raisins. You can also add 1/4 cup of chopped pecans at this point if you desire.

In your ring, place the mixture in the middle of it as shown in the image. Use your hands to make it as even as possible.

Start with the top part and fold each over, working your way back starting when you ended. 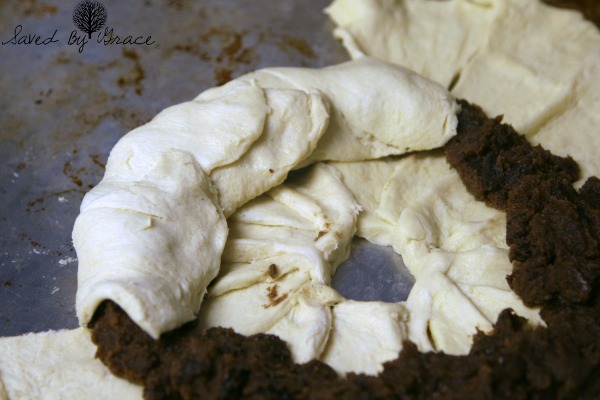 Move onto the middle points and fold them over. Make sure your ring is well sealed by gently pressing to find holes. Cut 4 small slits on the the ring around it. 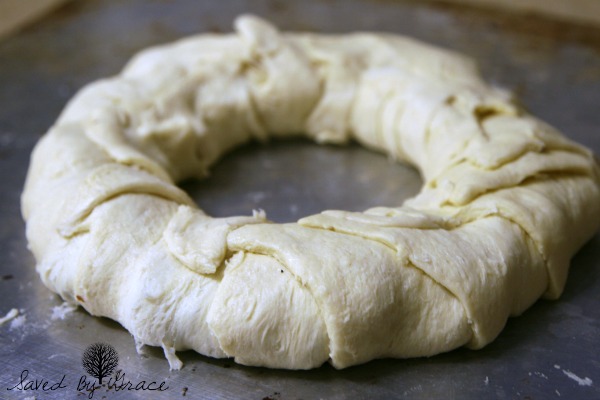 Place your ring in the center of the oven and set a timer for 10 minutes. At 10 minutes, it should be starting to brown well. Cover it with aluminum foil and bake an additional 10 minutes. It’s OK if the butter starts to come out. 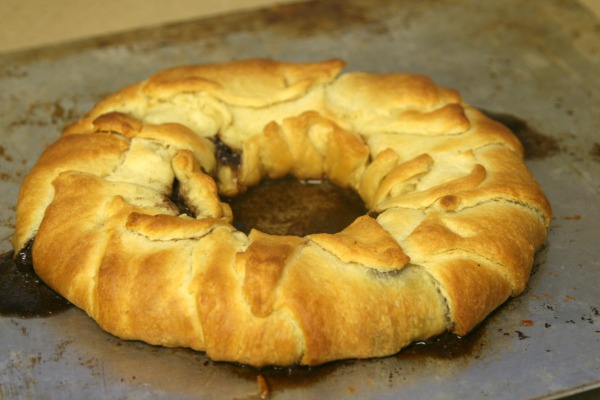 Melt Candy Melts in the microwave and pour into molds. Stick in the freezer.

Pull out of the oven and allow to cool for 10 minutes. Gently lift a corner up and shove the plastic baby in from the bottom. If using canned cream cheese frosting, microwave it so it is very soft and can be drizzled. If making your own, make it runnier. Drizzle generous amounts of it on your King Cake. Make rough ‘stripes’ of colored sugar in the order of purple, gold and green around the ring. Add a couple of fleur de lis. 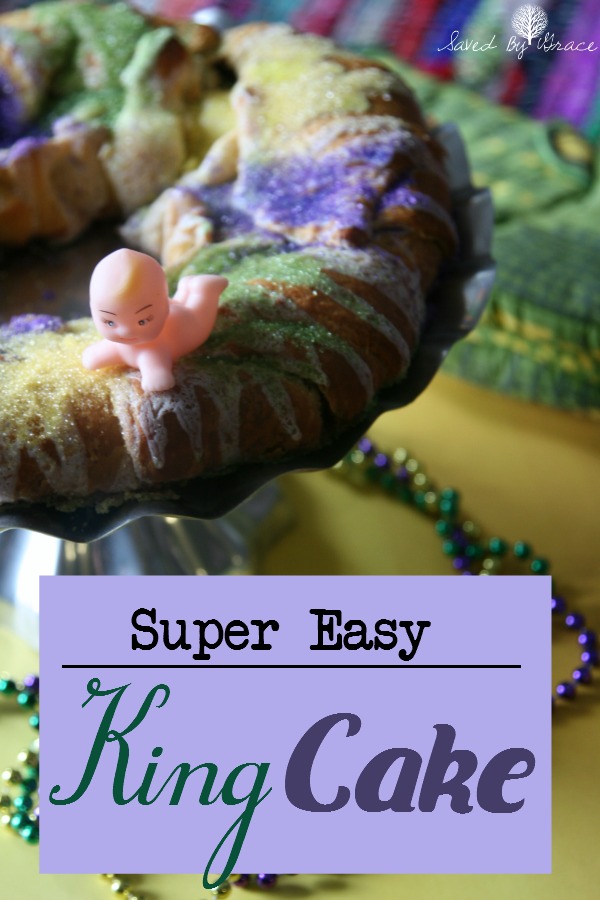 One Reply to “A Lazy King Cake Recipe”