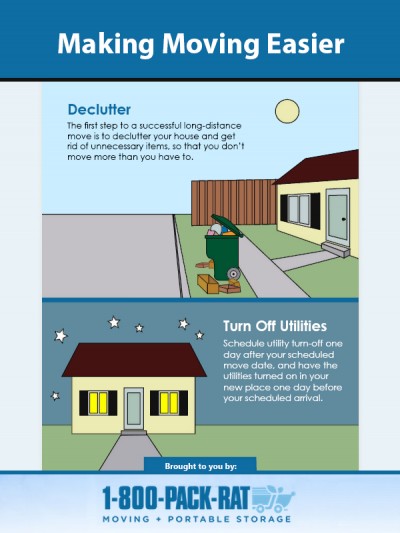 As most of  you know, I recently moved from Montana to Washington state. This was my first long distance move and boy, was I a rookie.

However, I am glad I at least followed one of these tips in the infographic below. That was to de-clutter. You would not believe how much stuff you own that you don’t need. I threw out an embarrassing amount to be completely honest.  We had a large dumpster for residents of the apartment to use. I filled that thing full. Twice. It felt amazing to do it, though. Like a purging of my soul!

The infographic is right, though. Why move things you don’t even want? It’s like moving your garbage. Unpacking is tiresome enough without having to go through everything when you just want to get things settled.

As far as the second tip on the infographic, I did that half right.  I did schedule my new utilities to be turned on 1 day before we got there, but totally forgot to turn off my previous address’ utilities. Don’t make that mistake. I now have to pay for days we were not even there.  The same goes for my cable. I forgot to get that one scheduled off as well. I would also suggest not setting up your cable company with haste. I did this and now I have a partial bill for a service I didn’t even want.

For more tips (and maybe a boost in your weary confidence, tired mover), check out my previous post, “What I Have Learned With This Move.”

No comments yet
Cleaning Family Homemaking