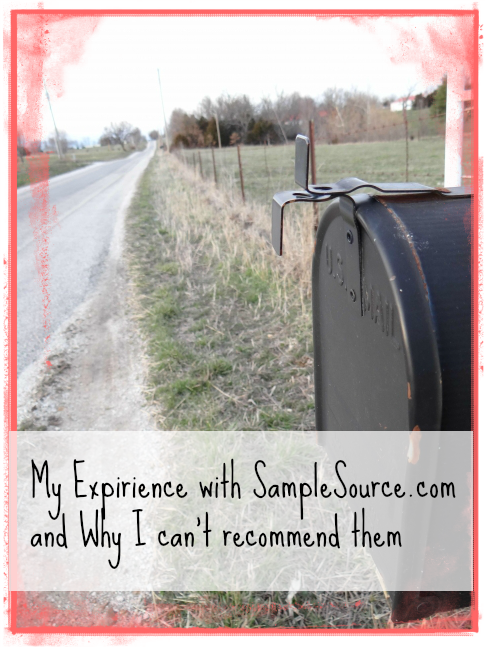 A fellow blogger, whom I respect a lot, recommended a company called SampleSource to me to try since they have just started sending out things in the US. SampleSource is a company that send out samples from top, well-know companies to anyone that requests them, in periodic packages.  I was excited and eager to give them a try so I could share them with you, my readers. I signed up, which was an easy process filled with a questionnaire about my personality and habits and then got an email confirming that I would be getting samples, soon.

A little while later, I got and email telling me that my sample package had shipped. I was excited! However, a couple weeks went by and nothing ever came. I was disappointed, but as a blogger, I sometimes know that when things are “shipped” it means they are in the queue to be shipped, but don’t actually get shipped that day, but just in case, I decided to email SampleSource and ask where my package was.

This was their response:

Hi there!
Your samples should have definitely arrived by now – definitely. And the address you have provided is correct in our system.
I can see in the system that your order was shipped – and you would have gotten an email confirming that.
If the package still has not arrived, it may have been lost in the mail or misdelivered by USPS – although rare, sometimes it can happen.
Please accept our apologies! We send our samples by regular mail, just like you would send a letter to a friend, so we cannot track it.
The good news is that we will have more samples coming in a few months, and because you are a registered member, you will automatically be emailed when they are available.
Thanks

Simple enough. I felt they maybe could have sent me out something again or explained that they had no more to send or something, or heck, even offered to throw a couple extra in next time, but an excuse about it getting lost in the mail  and an apology will have to do. I didn’t respond to that message and just kind of forgot about it.

Then, a couple weeks later, I get an email asking me to take a survey on the “samples I got”. Being that I belong to a couple sites similar to this and they require me to take the surveys in order to keep getting shipments, I thought, “I better take this if I hope to get samples next time..I hope there is a place on the survey for me to say I never got them..”

I did select the spot on the survey saying I never got the samples and then there was a place for me to put any comments I had about the samples or SampleSource.

I wrote in something about how I felt pushed aside and was basically told “too bad” about getting my samples and that was of annoyance. While, true, those were not the exact words they used in their email to me about my asking where my samples were, that was how it came across to me, since they were not willing to fix the issue and instead just made up an excuse.

Within minutes, I get this nice little nugget in my email from them:

H Christine
We saw your survey response – and that really was not fair. Nobody here told you “Too bad”. We explained the process and what likely may have happened.
If you are truly that upset, you are welcome to unsubscribe.
We took the time to respond to your email right away – in fact within minutes – so your note in the survey really isn’t fair at all.

So, dumbfounded, I am sitting here thinking, “Did they want my honest answers or did they want me to lie on the survey?” And what is this about “fair”? I was told to be honest. And that was honestly how I felt about being given an excuse and told, “we’ll getcha next time” instead of sending out a second package. Now, if they didn’t have more samples to send a second package, and they said that, I could be a little more understanding, but since that was not mentioned and I had no other relationship from past shipments in the mail from them, how did I know they didn’t just forget me? Perhaps it did get lost in the mail, but they just blamed the USPS rather than tried to make it right or explain further.

To top it off, to say, “If you are truly that upset, you are welcome to unsubscribe” is over the top rude and in my opinion, jumping the gun a bit. Why not at least attempt to solve the issue before you suggest that?

Yes, I am upset. I never got my products, was brushed aside and now sent a survey to take asking my honesty and was just attacked in my personal email because you didn’t like my HONEST answers to a survey YOU sent.

I want to make it clear, I am not upset at the fact that I didn’t get free samples, it was the sheer unprofessional-ism of SampleSource that upset me. I did write them back expressing everything I did here and was again told “I suggest you unsubscribe.”

Readers beware, SampleSource will possibly treat you this way if you have an issue as well. I suggest bypassing them altogether. I had intended on trying out this new service and recommending this to my fans, but I also believe in honesty and I just can’t recommend it after this. It really is a shame, because it seemed like a good way to try new products from top name companies. I also feel bad that these companies are being represented by this unprofessional company as well. I won’t hold it against them, but I hope they see this and decide to back out.